Everything You Need to Know About … Arbroath Smokies

Maybe you’re new to Arbroath smokies and want to know more. Or perhaps you had them as a child and hanker to find out more about them. Either way, here we take a deep dive into the world of one of Scotland and the United Kingdom’s most enduring smoked fish – haddock cured using a method that can be traced back hundreds of years.

WHAT ARE ARBROATH SMOKIES?

Arbroath smokies are small haddock which have been hot-smoked using a process that has remained almost unaltered in more than two centuries. The haddock (Melanogrammus aeglefinus) are typically caught in the North Sea and north-east Atlantic Ocean and landed in Scottish harbours.

Coppery brown and tough on the outside but pale and moist on the inside, Arbroath smokies possess a flavour that is succulent with a light smokiness and saltiness.

Like Stornoway black pudding, the fish are protected by law through their status of Protected Geographical Indication, which means that certain criteria must be met before the fish can receive the cherished title of Arbroath smokies.

Despite their name, Arbroath smokies originated in Auchmithie, a fishing village about three miles north of Arbroath in Angus, Scotland. Auchmithie is thought to have been established by Viking invaders around the start of the previous millennium, a belief supported by the fact that hot smoking was a method of preserving fish favoured by the Norse. 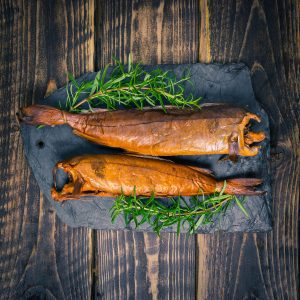 In her classic book The Scots Kitchen (1929), author F Marian McNeill quotes an unnamed source describing a typical evening in Auchmithie in the 19th century:

“‘With the setting of the sun, the boats come home and in the back-houses lamps are lit. Up the brae come the creels of fish, and soon every woman and child is gutting, cleaning and salting. Little sticks of wood are stuck into the haddock gills, and two by two, tied tail to tail, they are hung on little wooden spits high up in the old-fashioned lums [chimneys] … curing in the smoke of the fire; they are then taken down, gey black and sooty – but once remove the skins and what a delicious sight you see! Crisp, golden outer flesh paling into pure whiteness near the bone.’”

At the beginning of the 18th century Arbroath’s fishing trade was struggling and the town council began to lure fishermen from neighbouring villages, allocating decent housing and facilities in which the fishermen and their families could live and work. The people of Auchmithie started to move to Arbroath, bringing their boats, traditions and skills.

Some 200 years later, by 1920 the harbour area of Arbroath was mostly occupied by people from Auchmithie and even now the area is mainly inhabited by people descended from fishermen (today the area is officially zoned for fish smoking). The main producers of Arbroath smokies can trace their roots back through generations of their families, their skills having been passed down over the years.

The main producers of Arbroath smokies can trace their roots back through generations of their families, their skills having been passed down over the years

In the 19th century there was no refrigeration, and in order to preserve perishable foods such as fish there were only three methods available: salting, drying and smoking (or all three combined).

Fishermen and their families at the time lived in profound poverty. In order to survive, they began to travel south to Dundee carrying their hot-smoked haddock in their arms and in baskets on their backs, hoping to sell their goods. This was how the reputation of Arbroath smokies began to spread.

HOW ARE ARBROATH SMOKIES PRODUCED?

The haddock are sourced from fishing vessels that land directly at designated Scottish fish markets. At the processing premises they are headed, gutted and cleaned by hand, then placed in containers of dry salt to reduce moisture, add flavour and harden the skin. How long this takes depends on the size of the fish, which can vary from 350g to 550g.

During the salting process equal-sized haddock are paired and tied together by the tail using locally produced jute string, which was traditionally a byproduct of the many mills in the area (Dundee is historically famous for its “jute, jam and journalism”).

After the salting process the paired haddock are washed to remove the salt and hung to dry on triangular rails known as kiln sticks, which further toughens the skin.

At this juncture the smokers prepare a pit in the ground. Known as the barrel, the pit contains blocks of beech or oak which are lit and allowed to burn fiercely.

The three stages of smoking begin with the paired haddock being placed over the barrel on their kiln sticks and covered with a wet hessian sack, which cuts down the flow of oxygen to the fire and causes the flames to die down.

The heat from the burning wood causes the fish to release moisture which drops on to the fire, creating high humidity. It is the precise combination of heat and humidity which cooks and colours the fish, a process that takes from 45 to 60 minutes. Much but not all of the smoker’s skill lies in judging the weather and the dampness of the wood so that the balance of heat and humidity is perfect for the size of fish they are smoking.

Once cooked, the paired haddock are removed from the barrel and allowed to dry on their kiln sticks. Only then are the Arbroath smokies ready to eat.

Producers must appear on a register held by the Arbroath Fish Processors Association. They must operate within a strict geographical area, which is an 8km radius from Arbroath Town Hall that extends from the community of West Mains in the north to East Haven in the south.

ARE ARBROATH SMOKIES GOOD FOR YOU?

They are indeed. As with all white fish, they contain high levels of protein – which is good for your muscles – while being very low in fat compared to oily fish such as mackerel or salmon.

They also contain generous amounts of vitamins and minerals that are essential for brain function,  healthy skin, your immune system and cardiovascular health.

Of course the benefits of Arbroath smokies aren’t limited to your health – adding them to your diet will do wonders for your tastebuds (and culinary repertoire) too.

HOW DO YOU COOK ARBROATH SMOKIES?

Unlike other traditionally smoked fish like Finnan haddock, Arbroath smokies are cooked during the smoking process, so the hard work is done before you lift a finger. The pertinent question is: how do you prepare Arbroath smokies?

Given that the process behind Arbroath smokies has changed very little in more than two centuries, it’s unsurprising that preparing them doesn’t require any technical skill or complex equipment. The best way to prepare Arbroath smokies is simply to either brush them with butter or place a knob of butter inside and heat them under the grill or in the oven.

In The Scots Kitchen, F Marian McNeill suggests a method that is the definition of straightforward: “Heat the fish on both sides, open it out, remove the backbone, mill black pepper over the fish, spread with butter, close up and heat for a few minutes in the oven or under the grill. (In the old days it was brandered.) Serve piping hot.”

Besides eating them as described above, Arbroath smokies can be used in all manner of healthy recipes including pâtés (try substituting the smoked mackerel in our recipe, Cullen skink (replacing the traditional smoked haddock), fishcakes, any smoked fish pasta recipe and salads.

If you find a recipe that includes smoked fish, whether it’s mackerel, haddock, salmon or anything else, the chances are you won’t be disappointed if you choose Arbroath smokies instead. Just be aware that you won’t need to cook the smokies the way you do with smoked haddock or smoked salmon, which are cold smoked and require cooking.

Here at Fresh Fish Daily we can’t recommend Arbroath smokies highly enough. If you’ve yet to try these jewels in the crown of smoked fish, a delicacy whose roots reach back through time, then it’s time to remedy the situation – and pronto.

PrevPreviousHow to Reheat Fish
NextEverything You Need to Know About … CodNext