Everything You Need to Know About … Oysters

Oysters conjure an image of decadence and luxury but if you love seafood, don’t wait for high days and holidays to savour the taste of this sustainable and highly nutritious mollusc. No longer the preserve of high-end restaurants, oysters are easy to prepare at home for a regular treat.

The oyster (Ostreidae) is a saltwater bivalve mollusc that’s a pretty incredible feat of nature. It eats algae and other food particles that are usually drawn to the gills and can filter up to six litres of water per hour. With eyes all over its body to help evade predators, the oyster hides in its shell when sensing danger. It sounds like a myth from a fairy tale but every oyster is capable of making at least one pearl in its lifespan.

There are about 200 species of oyster around the world, though only a handful end up on our tables. Many species change their gender at some point and while some may only switch genders once or twice, this process can be repeated multiple times.

Most oysters are irregular in shape with oval shells, which are usually white-grey on the outside and white inside. They are 62-64mm long and weigh about 50g.

The hermaphrodite bivalves produce tiny, free-floating larvae, which attach to firm surfaces such as shells and rocks in salty waters after two to four weeks. This is when they take the form of tiny oysters and start to grow, reaching marketable size at about three years old. 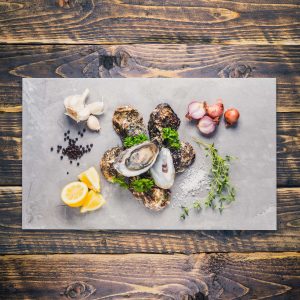 The growing period requires constant supervision, because as the oyster grows it needs more space and a larger area is required for the bed. It also has to be protected from natural predators, from skate and winkles to crabs, starfish and seabirds.

Thanks to modern aquaculture, cultivated stock is not in short supply and it’s of excellent quality that you can buy online. The bonus is that oyster farms don’t have a negative impact on the environment as there’s little waste.

First time shellfish eaters are sometimes unsure about what oysters taste like. With plump and springy flesh, oysters have a salty, creamy taste. The rule of thumb has always been that native oysters should be eaten in season, which means months containing the letter ‘r’ – September to April – though Pacific or rock oysters are available all year round.

These days, a plate of oysters equates to luxury but it wasn’t always that way. In the 19th century, Charles Dickens wrote that “poverty and oysters always seem to go together. The poorer the place, the greater the call there is”.

The Ancient Britons regarded shellfish as subsistence food, only to be scavenged when meat wasn’t available. It was thanks to the invading Romans that oysters were cultivated and nurtured. They grew young seed oysters in beds in estuaries and sheltered bays before transporting them to wealthy Romans living far from the sea.

In her characteristic wise and witty prose, celebrated American food writer MFK Fisher pays tribute to the delicate and enigmatic shellfish in Consider the Oyster (Duell, Sloan and Pearce, 1941). She reminisces about eating them in 1940s California, dining on the shellfish from willow baskets in Dijon in winter and downing them with a Ramoz gin fizz in New Orleans. She remarks: “Often the place and the time help make a certain food what it becomes.”

Native or European oysters breed naturally in British waters and are generally considered the best. They’re sweet, dense and clean with a mineral-like aftertaste, available when there is an ‘r’ in the month. These include Fresh Fish Daily’s Atlantic oysters, harvested in the north-east Atlantic and possessing a fresh, salty taste and firm texture.

Pacific or rock oysters are bigger than native species with a more ridged shell and are available all year round.

ARE OYSTERS GOOD FOR YOU?

Rich in zinc, vitamin B12 and copper, oysters are also a good source of iron, vitamin D and iodine, which means they deliver a potent hit of protein and minerals.

Containing nearly 50 times the amount of zinc and eight times the amount of iron that is found in chicken, oysters pack a nutritional punch. As well as processing the carbohydrates, fat and protein we eat, they help to produce the all-important red blood cells that carry oxygen around the body. Oysters are also a good source of omega-3, helping to protect the heart.

Of course, oysters also have a reputation for being an aphrodisiac – maybe it’s all due to those high quantities of zinc.

HOW DO YOU COOK AND SERVE OYSTERS?

First things first: always buy fresh oysters live, with the shells closed. They should feel heavy as they’ll be full of water. To test if the oyster is alive, prick the cilia, which should instantly retract.

The key to a good oyster is freshness. It should smell of the seashore – imagine the scent when the tide is rolling out over seaweed-covered rocks. It should be full in the shell, with a firm texture and brimming with the natural juice that is its life blood, not just sea water.

The heel of the oyster, in the deep part of the shell, should be a creamy or ivory colour. And the frill should be moist and pulsating. The oyster should always look bright. If the shell isn’t firmly closed, it should do so immediately when tapped.

Most of our oysters in the UK are eaten raw and in The River Cottage Fish Book (A&C Black, 2007) Hugh Fearnley-Whittingstall waxes lyrical about the shellfish: “The oyster is perhaps the only item on the seafood menu for which, almost wherever you are in the world, the default setting for its preparation and consumption is raw, live, unadorned, straight from the shell. Sure, a squeeze of lemon is nice, and other embellishments – Tabasco, shallot vinegar, black pepper – are favoured by some enthusiasts, but an oyster with nothing but the briny juices of its own shell is by no means incomplete.”

Oysters are best served chilled and the classic way to present them is on a bed of ice. A dozen per person is a good portion

Larousse Gastronomique (Hamlyn, 2009) firmly agrees: “Oysters are nearly always eaten live and raw, plainly dressed with lemon and accompanied by bread and butter, or with a vinegar dressing containing shallots and pepper.

“They can also be cooked and used in hot and cold dishes. Oysters can be poached, then chilled and served with various sauces, sometimes in barquettes; they can be browned in the oven in their shells or served with artichoke hearts or in croustades.

“Oysters can also be cooked on skewers, made into fritters, croquettes, soups and consommes, and used as a garnish in fish recipes.”

For something more traditional, F Marian McNeill’s offering in The Scots Kitchen (1929) is oysters stewed in their own juice, Scots fashion. Her recommendation is to use the largest oysters you can get.

“Wash them clean through their own juice; lay them close together in a frying pan; sprinkle them with a little salt. Do not put one above another.

“Make them a fine brown on both sides. If one pan is not sufficient, do off more. When they are all done, pour some of their liquor into the pan, mixing it with any that may be left from their cooking. Let it boil for a minute or two. Pour it over the oysters and serve very hot.”

The big question for many first-time oyster eaters is how to open them. To shuck or open an oyster, hold it in a folded tea towel and lever it open with a short-bladed, pointed knife. Position the hinge of the oyster towards you and cup the deeper side of the shell in the palm of your hand. Once the shell gives a little, prise the two sides apart and use the knife to slice through the oyster’s adductor muscles attached to the shell.

Like any meat, oysters should be chewed. This releases the full flavour, and the juice from the shell will complete the experience

Oysters are best served chilled and the classic way to present them is on a bed of ice. A dozen per person is a good portion.

You can cook oysters and many believe this intensifies the creaminess of the flesh. If you’re looking for ideas on how to cook the shellfish, try recipes that barbecue them in their shells until they pop open, grill them or cook them in a soup or risotto.

The all-important question is how to eat oysters. Oyster flesh has a wonderful texture and, like any piece of meat, should be chewed. This also releases the full flavour, and the juice from the shell wlll complete the experience.

Some people are wary of oysters because of the risk of food poisoning. Elderly people, pregnant women, very young children and anyone with a weakened immune system should avoid eating raw or lightly cooked shellfish to reduce their risk of getting food poisoning.

The joy of oysters is that minimum cooking is required. It takes less than half an hour to prepare and serve an Asian-style broth, for example, like our Chinese oyster soup. It’s a similar time to have sophisticated oysters a la Boston on the table, served with gruyere and crunchy breadcrumbs.

All the taste is in the shellfish and they really only need minimal additions, otherwise you’re missing out on that fantastic salty flavour.

Oyster recipes to look out for: